Necessity for creation, operation and further development of VTS in Russian seaports is provided by Regulation 12 of International Convention on safety of life at sea (SOLAS-74) (1974). It states that cooperating coastal states are obliged to establish Vessel Traffic Services in areas, where, according to their oppinion, traffic density or risks are high enough to require such services intended to increase the level of human life safety at sea, security and efficiency of shipping, as well as protection of coastal areas environment against possible impact of shipping. Coastal states, which design and implement VTS, are to follow, as far as possible, the provisions of Vessel Traffic Services Guidelines adopted by International Maritime Organization (IMO) Resolution А.1158(32).
To meet the foregoing provisions with focus on international and internal experience in establishing and maintaining navigation control systems supplied by such navigational and informational content that would, based on the up-to-date achievements of science and technology, reduce the risk of accidents, Ministry of Transport of the Russian Federation and Rosmorrechflot in association with FSUE "Rosmorport", alongside with establishment of other coastal systems for safe navigation control, provide establishment of VTS based on coastal radar stations and automatic ID systems, ensuring permanent traffic control, compliance with the rules on shipping in the VTS coverage areas, and automatic exchange of information (including navigation data) between vessels and coastal services. Coastal VTS of the Finland Gulf


Nowadays there are 24 VTS in FSUE "Rosmorport" economic authority. Using VTS, FSUE "Rosmorport" renders navigation services to vessels sailing on approaches and in basins of the seaports, in the eastern part of the Gulf of Finland, in Kandalaksha Bay, in the Kerch Strait, and in the Peter the Great Bay.
All the VTS are staffed with highly qualified personnel. These are VTS operators who have had all required training, including practical one, and passed qualifying examination to the master of the relevant seaport, and got VTS operator's certificates, along with engineers and technicians who provide 24-hours support of all the high-tech equipment systems. Overall number of employees, involved in VTS operating and maintenance, runs up to more than 600 people. FSUE "Rosmorport" arranges VTS operation and provision of its services in accordance with IMO Resolution А.1158(32) (Vessel Traffic Services Guidelines), General Rules of shipping and mooring in the seaports of the Russian Federation and on their approaches, approved by Mintrans order No. 395 dated 12.11.2021, compulsory regulations in seaports, approved by seaports' authorities and/or masters, and also guides and recommendations of the International Association of Lighthouse Authorities (IALA).
Each VTS of the enterprise has been examined in accordance with the Russian legislation and granted duly issued certificates of compliance. Of all the VTS in the enterprise’s economic authority, 12 VTS are granted the highest quality cetificate, 7 VTS have 1st category certificates and 5 VTS have 2nd category certificates.

Operation, maintenance and development of the currently functioning VTS and building of new ones are among major tasks of FSUE "Rosmorport" from its very foundation.
As the enterprise and its branches were developing and were on the first stage of statutory activities performance, it got 10 permanent VTS.
In 2012 VTS Vladivostok and VTS Nakhodka, included in the Regional VTS, were assigned to FSUE "Rosmorport" within implementation of Mintrans of Russia decision on the Far-Eastern Branch formation on the basis of OJSC "NORFES".
In 2013 VTS Makhachkala, that was earlier used by FSUE "Seaport of Makhachkala", was assigned to the enterprise in accordance with Rosmorrechflot order No. AD-37-p dated 14.0.22013.
Since these facilities showed signs of strong wear, the enterprise carried out their overhaul repairs. Following its annual plans, FSUE "Rosmorport" has implemented and continues to implement projects on modernization and reconstruction of VTS facilities in order to keep up their equipment at the up-to-date level.
From 2005 to 2021 in the framework of the VTS facilities development program FSUE "Rosmorport" has built, rebuilt and set into operation 12 more VTS:

The projects improved shipping on approaches and in waters of the relevant seaports and brought shipping safety, life safety on sea and environment protection on a new level. 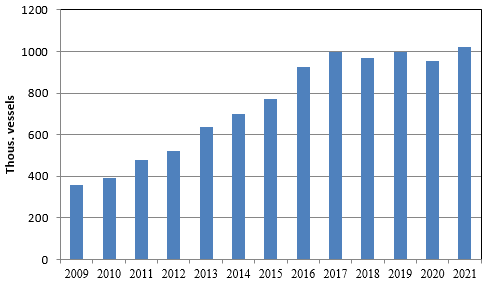 More details on terms and conditions of navigation services involving VTS in corresponding seaports and coastal areas can be found in sections of FSUE "Rosmorport" website, describing services provided by the branches.