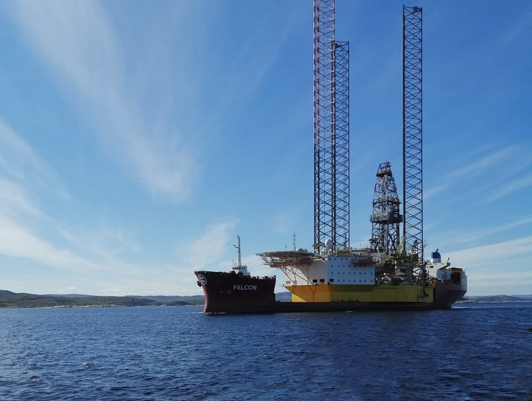 The pilot service of the FSUE "Rosmorport" Murmansk Branch successfully carried out piloting of the specialized submersible vessel Falcon (flag of Norway), transporting a self-lifting floating drilling rig (SFDR) Perro Negro 8 (flag of the Bahamas) (length - 94.9 m, width - 62 m, draft - 5 m, height of supports - 153.4 m) on its board. The pilot operation was performed by the pilot of the FSUE "Rosmorport" Murmansk Branch Andrei Polyakov.

The Falcon vessel with SFDR on its board was safely proceeded along the Kola Bay and anchored on the raid of the seaport of Murmansk.

After anchoring the vessel on the raid, pilots Andrei Lysov and Konstantin Bogodukhov took part in the navigation operation to unload the Perro Negro 8 SFDR from the deck of the Falcon vessel and tow it to the planned station at berth No. 45 of the fish terminal of the seaport of Murmansk.

Unloading and towing of such objects is a pilot operation of the highest difficulty, requiring professionalism, special knowledge and experience that only pilots of FSUE "Rosmorport" have. Before carrying out this pilot operation, during the technical training conducted on the basis of the enterprise all aspects of the operation, hydrometeorological conditions, maneuvering characteristics and arrangement of the vessels involved into operation, as well as actions in possible emergency situations were worked out. Four port tugboats whose task was to keep the SFDR in place until lowering it to the ground and fixing its 3 retractable supports of 153.4 meters height each took part in the operation.

The piloting of SFDR to the installation site and its positioning was successful, despite difficult hydrometeorological conditions: wind gusts reached 15-17 m/sec, which once again confirms the high professional level of the pilot group.

The drilling rig arrived at the seaport of Murmansk for its preparation for subsequent towing to the Ob Bay of the Kara Sea for the construction of an exploration well.

The start of the operation on towing SFDR to the site of drilling operations is scheduled for the first decade of July 2021, depending on the ice situation on the transition route. 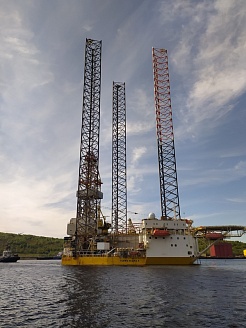 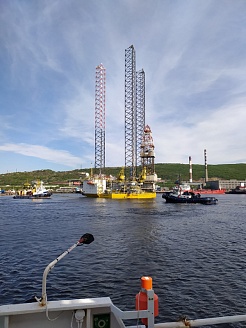 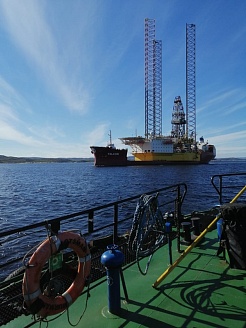