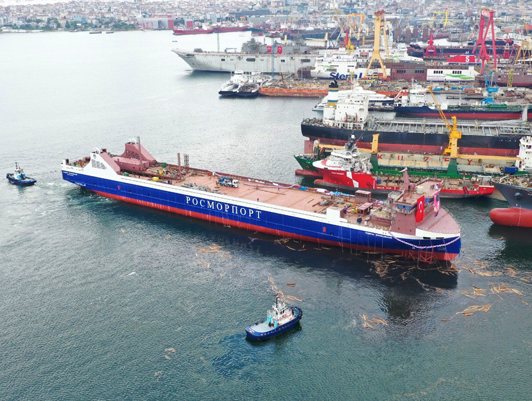 The road-rail dual-fuel ferry General Chernyakhovsky, which is being constructed by the order of FSUE "Rosmorport", has been launched.

The construction of the ferry is carried out by LLC Nevsky Shipyard (part of JSC United Shipbuilding Corporation / USC) and the Kuzey Star Shipyard by order of the Government of the Russian Federation.

Previously, on August 21, 2020, a ferry of a similar project, Marshal Rokossovsky, which is being constructed by the order of FSUE "Rosmorport" for the Ust-Luga – Baltiysk route, was launched.

"I am sure that the ferries General Chernyakhovsky and Marshal Rokossovsky will successfully work on the Ust-Luga – Baltiysk route. The commissioning of these ferries will allow us to significantly update the fleet engaged in this crossing, which is strategically important for the country, reorient parts of the cargo flow currently flowing to and from the Kaliningrad Region through the territory of the neighboring countries, as well as ensure the transportation of goods in volumes necessary for domestic consumption,” said the General Director of FSUE "Rosmorport" Aleksandr Smirnov.

The use of environmentally clean fuel will reduce carbon dioxide emissions to the atmosphere by 20-30%, nitrogen oxides – by over 90%, sulfur oxides and carbon black – by 100% compared to similar vessels running on traditional heavy fuel.

Ivan Chernyakhovsky was the youngest front commander and army general during the Great Patriotic War, the liberator of Kiev, Minsk and Vilnius.

The granddaughter of Ivan Chernyakhovsky Anastasia Orlova and great-granddaughter Neonila Vedoshchenko conveyed their congratulations from the marshal's family:

"Our family is grateful for the memory of Ivan Danilovich Chernyakhovsky, army general, commander of the 3rd Belorussian Front, and we are proud that the ferry, which has a new environmentally friendly design and provides cargo transportation of vital importance to our country, was named after him."