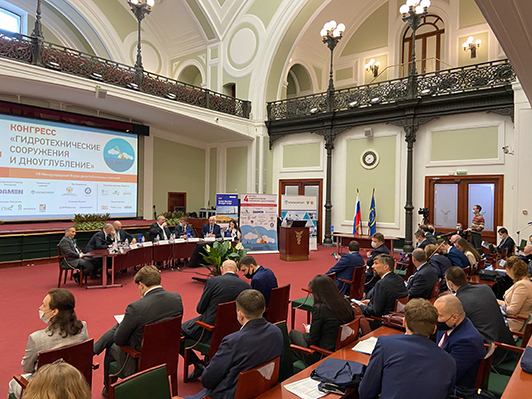 FSUE “Rosmorport” takes part in the international congress "Hydraulic Engineering Facilities and Dredging" which takes place in the Chamber of Commerce and Industry of the Russian Federation. It was organized by the PortNews Information and Analytical Agency. FSUE “Rosmorport” is the general partner of the congress.

Denis Viznarovsky, Head of the FSUE “Rosmorport” Capital Construction and Repair Department, made a report on promising projects of FSUE “Rosmorport” on the creation of hydraulic engineering facilities and dredging and issues hindering their implementation.

In 2020, the capacity of the seaports of Russia increased by more than 32 million tons due to the commissioning of new seaport facilities. Today, FSUE “Rosmorport” is implementing at various stages large projects aimed at creation of maritime terminals, among them the port complex in Gelendzhik, the maritime terminal in Pionersky, the transshipment LNG complex in Bechevinskaya Bay. At the same time, the company systematically faces difficulties in pricing procedure for dredging within the framework of the projects.

Today, there is a situation in the marine dredging market in Russia when the time costs included in the current element estimates and unit prices for dredging do not correspond to the actual resource costs of dredgers and do not take into account the actual conditions for dredging. Besides, the current estimate base does not include a number of necessary norms and rates related to the modern foreign dredging fleet. In general, this leads to the establishment of an estimated cost inadequate for the market, and, as a result, to disruption of competitive procedures.

This year, FSUE “Rosmorport” begins work on updating the current estimated standards and unit rates for dredging and clarifying the cost of operating of floating equipment.

There are also issues related to the environmental management of dredging operations. One of the main issues is the impossibility to respond quickly to the need for repair dredging. In accordance with the current legislation, the average period for development of design documentation justifying dredging and obtaining permissions is 1.5 years. Of this term, approximately 8 months are spent on approval of the project and obtaining permission for implementation of underwater dumping.

Dredgers also face a ban on work during spawning and migration of aquatic biological resources in the area of work, without taking into account the actual presence of the species in the water area of the seaport. Another problem is the discrepancy between the cost of events aimed at compensation for damage to aquatic bioresources and caused damage de facto: according to the current damage assessment method, even when damage is caused to low-value and weedy types of aquatic bioresources, it is compensated with the valuable and most valuable types. In this regard, the enterprise continues to work with the Russian Federal Agency for Fishery in terms of amending the methodology.

Over the past year, FSUE “Rosmorport” provided navigation parameters for water areas and approach channels at 49 facilities in 22 seaports of Russia, performing dredging in the amount of 7.8 million cubic meters. According to preliminary plans, the volume of repair dredging of FSUE “Rosmorport” in 2021 is about 8.3 million cubic meters of soil. 13 vessels of the dredging fleet of the enterprise are already involved into operations.

More new dredging vessels are being included in the fleet of the enterprise. As a result, the share of dredging performed by own equipment is steadily increasing. From 2014 to 2020, this indicator increased from 52% to 90%, which led to a significant reduction in the cost of attracting contracting organizations. Almost the entire volume of works during this year is planned to be carried out with the use of its own equipment (about 8 million cubic meters).

Vladimir Vinogradov, Head of the FSUE “Rosmorport” Fleet Operation Department, in his report told more about updating the dredging fleet. For example, since 2016, the dredging fleet of the enterprise has been updated with 25 new vessels with a total value of more than 9.5 billion rubles. The fleet of the enterprise is updated at its own expense, without attracting funds from the Federal Budget.

Photos made by IAA PortNews 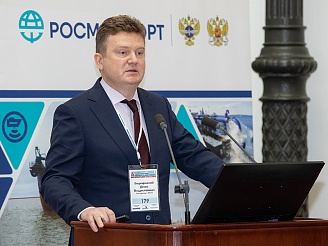 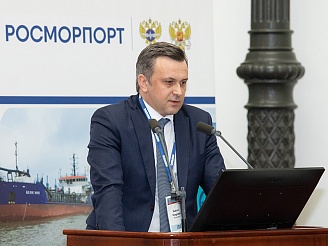 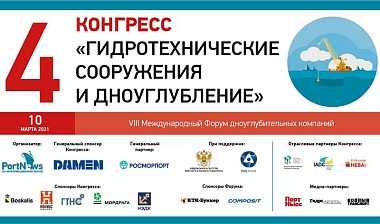