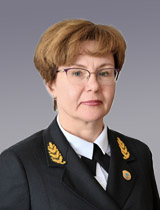 In 1996 she graduated from Economics and Law Academy in Khabarovsk with a specialization in accounting and audit, as an economist.

In January 2018 she has been transferred to the position of Director of the FSUE “Rosmorport” Vanino branch.

Badge “Honored Worker of the Navy”

Gratitude of the Minister of Transport of the Russian Federation 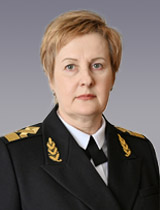 In 1984 she graduated from the Blagoveshchensk financial college with the with a specialization in state budget as a financial expert.

In 2002 she graduated from the Khabarovsk State Academy of Economics and Law with a specialization in bookkeeping and audit as an economist.

She started labor employment in 1984.

Information on labor activity over the past five years:

From June 2007 to November 2017 she worked as chief accountant of the Union “The Chamber of Trade and Commerce of Sovetskaya Gavan”.

From November 2017 to January 2018 she worked as senior expert officer of the FSUE “Rosmorport” Vanino Branch planning and economic department.

In February 2018 she was transferred to the position of chief accountant of the FSUE “Rosmorport” Vanino Branch. 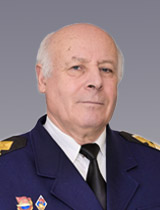 Anatoliy Litvinenko was born on February 22, 1955 in the village of Konstantinovka of the Krasnokutsky district, Kharkiv region, Ukrainian SSR.

In 1978 he graduated from the Odessa Higher Marine Engineering College majoring in “Navigation on sea routes” with qualification "Engineer-navigator".

He started his labor activity in 1987.

From September 2008 to December 2015 he held the post of First Deputy of General Director for Navigation Safety of "Far Eastern Tanker Company" ltd.

In January 2016 appointed Deputy Director for navigation safety and operations of the FSUE “Rosmorport” Vanino Branch. 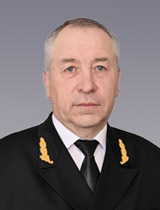 Lyahov Gennady Vladimirovich was born on October, 2nd, 1962 in the settlement of Vanino, Khabarovsk territory.

In 1986 he graduated from Komsomolsk-on-Amur State Technical University with a specialization in industrial and civil building, as a construction engineer.

From September, 1980 till August, 1981 he worked as docker-machine operator at Vanino Sea Trading Port.
From August, 1986 till December, 1996 he was master, construction superintendent, sector chief at Strojtrest 508.
From December, 1996 till June, 2008 he held the positions of sector chief, construction superintendent, chief engineer, chief of the industrial-building complex at Vanino Sea Trading Port.
In June, 2008 Gennady Vladimirovich was appointed chief engineer of the FSUE “Rosmorport” Vanino branch.