One of the world's largest four-masted barks Sedov participating in the world cruise dedicated to the 200th anniversary of the discovery of Antarctica by the expedition under the command of Bellingshausen and Lazarev and the 75th anniversary of the Victory in the Great Patriotic War of 1941-1945, arrived in the sea port of Petropavlovsk-Kamchatsky.

Pilots of the Petropavlovsk branch of FSUE “Rosmorport” provided pilotage of the vessel and its placement to the landing dock of the harbor station.

There are 138 cadets from Kaliningrad and Murmansk aboard the bark.

The bark's crew took part in the city celebrations of the Day of knowledge and ceremonial events dedicated to the 75th anniversary of the end of World War II.

The sailing training ship Sedov set out for the world cruise in December 2019 from the seaport of Kaliningrad. The bark will return to Kaliningrad by the Northern Sea Route, where icebreaking vessels will accompany it for safety. 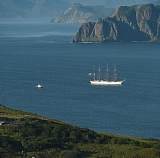