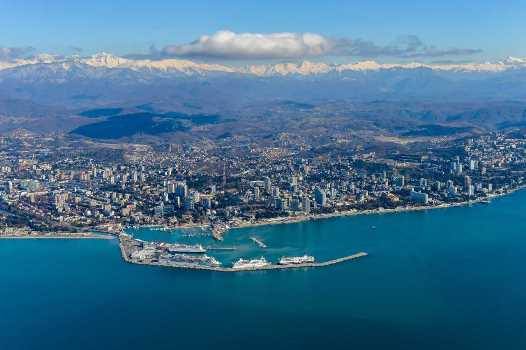 The history of the Sochi seaport dates back to 1872 when the “Russkoe obshchestvo parokhodstva i torgovli” ("Russian Society for Shipping and Trade") agency was organized in Sochi, which acted as the passengers receiving and sending center.

In 1899-1901, the harbour was built on the place where the “Kavkazskaya riviera” (“Caucasian Riviera”) spa resort was situated.

In 1923, the harbour deteriorated and was demolished.

In 1924, after the establishment of Soviet system the “Sovtorgflot” Sochi maritime agency was organized in Sochi.

In 1930, the Sochi maritime agency was subordinated to the port of Tuapse and the Sochi harbour became the attached point of the Tuapse Seaport.

In 1934, by the Council of People's Commissars of the USSR order dated 31.03.1934 № 698 the Sochi department of the Navy as an independent shipping company was established, and the Sochi attached point was converted to the third digit port. The port of Sochi included the following attached points: Matsesta, Khosta, Adler, Pitsunda, Gagra, Gudauty, Psirtskha. The Sochi Sea Shipping Company district of activity was fixed from Anapa to Batumi. With the development of Sochi spa resort local passenger services were rapidly developing, they were carried out by the local passenger fleet on the lines of suburban and local posts: Sochi-Sukhumi, Gagra-Sochi, Tuapse-Novorossiysk, Anapa-Novorossiysk, Riviera-Sochi- Khosta. Therefore, in the same year a marine station and a quay in Khosta and Kurpark were built in the Sochi Seaport, as well as a quay on Matsesta.

In the period from 1935 to 1938, at the place of the today’s building of the marine station, the boathouse was organized for lifting boats for the wintering anchorage, as well as the ship repair building and cargo warehouse building. At the origin of the Voykov Street the passenger pavilion temporary wooden building was built.

In 1938 the technical design of the port of Sochi was drafted and approved. The total cost of all of the port constructions (not including the station) was 32.2 million rubles. In the same year the Port Administration residence was built.

In 1941 with the outbreak of World War II the construction was stopped. The Seaport of Sochi was immediately adapted to provide transport for people going to the front, as well as ammunition, weapons, equipment, supplies and repair of military ships.

In 1942 the Sochi Sea Shipping Company was liquidated and its functions were transferred to the port of Sochi.

In 1946, by the Minmorflot of the USSR order dated 10.06.1946 No. 257 the Sochi Sea Shipping Company activity was restored with the direct subordination to the Ministry of the Navy of the USSR, which included on base of the internal cost accounting the Sochi port and the attached points from Lazarevskoe to Adler inclusive.

In 1947, construction of the port of Sochi was resumed.

In 1948, construction of the cargo and the ship repair berths, which began before the war, was completed.

In 1949, the shallow gliders and bunker berths were commissioned.

In 1950, construction of the passenger berth No. 2 was completed.

In 1952, the berths for boats and gliders were built.

In 1954, the Chernomorsky State Shipping Company Agency in Sochi was reorganized in the Sochi Seaport.

In 1955, under the project of K. Alabyan, academician of architecture, L. Karlik, architect, and A. Kuzmin, engineer, construction of a unique marine passenger station building was finished. Every year it received more than 600,000 passengers on line and cruise Soviet and foreign vessels.

In 1965, the volume of passenger traffic totaled nearly 1.8 million people, and by the mid-70's the port of Sochi, with 18 vessels of the Kometa type, had become the main basis for the development of high-speed passenger lines on the Azov-Black Sea basin.

In 1967, the Sochi Seaport became a member of the Novorossiysk Shipping Company. About 1 thousand people worked on it. Passenger traffic reached 2 million people, which allowed the Sochi Seaport to abandon the state subsidies.

In 1969, by the Council of Ministers of the USSR order dated 23.06.1969 No. 1268-rs the Minmorflot of the USSR proposal on the opening of the Sochi Seaport for foreign vessels was adopted.

In the period from 1980 to 1991, the main activity of the Sochi Seaport was the carriage of passengers on suburban and local traffic routes, maintenance of passenger vessels of the Chernomorsky Shipping Company and foreign cruise vessels with foreign tourists, repair of the harbor vessels, piers, terminals, port facilities and cargo handling.

In 1994, in the Seaport of Sochi for the implementation of state port supervision the State Institution “Sochi Seaport Marine Administration” was created which acted as the port authorities.

In 1997, a branch of the OJSC “Novoship” in the Seaport of Sochi was reorganized by separating into the OJSC “Sochi Sea Commercial Port".

In November 2003, the OJSC “Sochi Sea Commercial Port” became a member of the “MedSruise” International Association of Mediterranean Cruise Ports as the representative of the Seaport of Sochi.

In 2004, the FSUE “Rosmorport” Sochi Branch began its business operations.

In 2008, by the Russian Government order dated 20.11.2008 No. 1724-r in the Seaport of Sochi the cargo and passenger permanent multilateral checkpoint over the state border of the Russian Federation was opened.

In November 2009, by the Rosmorrechflot order dated 27.11.2009 No. AD-246-R information on the Seaport of Sochi has been recorded in the Register of the seaports of the Russian Federation.

In February 2011, by the Government of Russia order dated 25.02.2011 No. 286-r due to the inclusion of the anchorage area No. 407 near the Mzymta river mouth the borders of the Seaport of Sochi were amended.

In May 2011, by the Rosgranitsa order dated 05.05.2011 No. 80-PP the borders of the maritime cargo-passenger permanent multilateral checkpoint over the state border of the Russian Federation in the Seaport of Sochi were approved.

In August 2014 by Mintrans of Russia Order dated 5.08.2014 No. 219 anchorage areas for detained or arrested vessels were determined in Sochi Seaport.

In September 2014 by Government of Russia Regulation dated 29.09.2014 No. 1912-r Sochi Seaport was included into the least of seaports open for foreign vessels.

In May 2017 by Order of the Ministry of Transport of Russia dated 30.05.2017 No. 202the rules of regime in the sea cargo-passenger permanent multilateral checkpoint through the state border of the Russian Federation in Sochi Seaport (Krasnodar Territory) were approved.

Prospects for the development of the Seaport of Sochi are coming from the implementation of the Program for the Construction of Olympic Venues and Development of Sochi as a mountain resort, and with the active promotion of the Seaport of Sochi on the market of the world tourism industry, by reviving the regular maritime passenger traffic and cruise tourism on the Black Sea coast of Russia.

Schemes, Charts of the Sea Port

Photo Galleries of the Sea Port

Video from the Sea Port