The inter-departmental commission, including representatives of Russia’s Transport Ministry, the Federal State Institution “Rosgranstroi”, the Border Guard Department of Russia’s FSB for the Russia’s FSB Western Arctic Region, the North-Western Territorial Office of Russia’s Federal Customs Service, the Northern Energy Customs Post of Russia’s FTS Central Energy Customs, the Rospotrebnadzor Directorate for Surveillance on Consumer Rights Protection and Human Wellbeing for the Murmansk region, visited the reconstructed Russian checkpoint on June 6, 2018. The checkpoint is located in the building of the sea terminal in the seaport of Murmansk.

Members of the inter-departmental commission inspected the premises of the checkpoint and studied the work of its systems and equipment. They made sure of all necessary things to exercise control functions by state supervisory bodies while checking passengers crossing the Russian border.

Following the results of the work the inter-departmental commission set up full conformity of the checkpoint facilities in the sea terminal building to the requirements lodged to the construction, reconstruction, equipment and technology of buildings, premises and structures, which are necessary to organize border guard, customs and other control on Russian checkpoints.

The results of the work of the inter-departmental commission provide the basis for issuing a Russian regulatory legal enactment by the Russian Transport Ministry in line with established procedures to open and determine the limits of checkpoints. That will allow for starting in full the check of passengers crossing the Russian border by sea transport in the seaport of Murmansk. 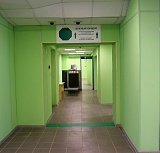