Within the framework of the events timed to the celebrations marking the 15th anniversary of FSUE “Rosmorport” the Murmansk Branch held an action on June 1 to put in trees’ plantlets by the building of the sea terminal in the seaport of Murmansk.

Employees of FSBI “The Administration of Seaports of Western Arctic” and PJSC “The Murmansk Commercial Seaport” have joined the action band provided support to the Murmansk Branch.

Director of the Murmansk Branch Aleksandr Bengert, acting captain of the seaport of Murmansk Nikolai Tsepkov, Director-General of PJSC “The Murmansk Commercial Seaport” Aleksandr Masko have addressed the audience. They praised the joint event, wished FSUE “Rosmorport” further achievements and suggested to organize more of such joint events in the future.

Upon completion of the address the participants in the festive events have put in plantlets of crenate rowan tree and  mountain pine. 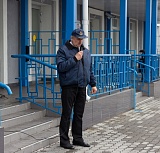