The Murmansk Branch has provided the square in front of the sea terminal in the seaport of Murmansk to organize a dance and stage performance.

On the evening of April 27, 2018 about 800 people – residents and guests of Murmansk gathered on the square to see the Russian first run of an international dance and stage performance “The Power of Diversity”.

The international project unites young people from all over Europe. They seek to produce a unique street stage performance. Over 50 people from Russia, Germany, the Netherlands, Great Britain, Spain, Poland, Slovakia, Romania, Denmark, and Norway turned out to be on the same stage. Dancers from Murmansk and Northern Norway have joined the team. After several runs they took the floor on the coast of the Kola Bay.

The event has been held within the international cultural festival “The Barents Bird” with the support of the Norwegian Consulate-General in Murmansk.

All people, who wished and waited to take part in the event, were able to visit a café opened in the sea terminal – in the internal lines zone. 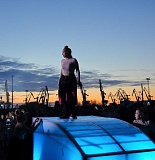