Official representatives of Rosmorrechflot (Federal Agency for Marine and River Transport) attended the construction site where at present the sea terminal in the seaport of Murmansk is being reconstructed in the framework of the agency annual plan of on-site inspections of capital projects financed with budgetary allocations.

Acting Director of Murmansk Branch Alexander Bengert briefed the members of the Rosmorrechflot Commission with the current state of execution of construction works.

During implementation of procedural events by the members of the Commission in the Murmansk Branch there was also verified general contractor's performance of contractual obligations, registration of completion certificates, the availability of as-built documentation and other reporting documents reflecting the progress of reconstruction of the facility. 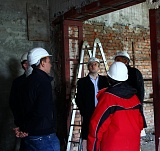