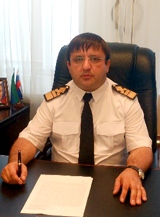 Apandi Nurmagomedov was born on January 27 1974 in the village of Tsurib in Charodinsky area of Republic of Dagestan.

In 1997 he graduated from the Dagestan State University with a degree in management as an economist-manager.

In 2003 he graduated from the Dagestan State University with a degree in law as a lawyer.

In 2004 he received a degree of Candidate of Economic Sciences.

In 2012 he graduated from the Russian Presidential Academy of National Economy and Public Administration.

Information on the labor activity:

From October 2011 till April 2005 he consecutively held positions of Deputy Head, Head of SUE Dagtekhinventarizatsiya in Republic of Dagestan.

From April 2005 till February 2008 he worked as Deputy Chief of Administration of the municipal entity “Kizilyurtovskiy area” of Republic of Dagestan.

From April 2008 till October 2008 he worked as Senior Teacher of Economics in the Dagestan State University Branch in the town of Khasavyurt.

From October 2008 till November 2010 he worked as Chief of “Sulakskoye” Department for Gaz Service Operation of LLC Dagestangazservis.

From December 2010 till November 2011 he was Deputy General Director for Operations of FSUE “Makhachkala Sea Trade Port”.

From November 2011 till August 2012 he consecutively held positions of Chief Specialist of the Port Management Group, Chief Specialist for Contract and Litigation Work of the State Property Management Department of the FSUE “Rosmorport” Astrakhan Branch.

In August 2012 he was appointed Director of FSUE “Rosmorport” Makhachkala Branch.

Honored Economist of the Republic of Dagestan.

Honors Certificate of the Republic of Dagestan. 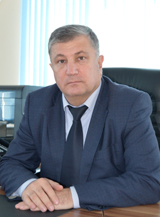 Deputy Director for operation of the FSUE “Rosmorport” Makhachkala Branch

Batyr Dzhamalutdinov was born on October 12, 1963 in the city of Makhachkala of the Dagestan ASSR.

In 1991 he graduated from the Dagestan Polytechnic Institute, in specialty “Industrial and Civil Construction” with qualification “Engineer-Constructor”.

Information on his career for the past 5 years:

In November 2016, he was appointed Deputy Director for operation of the FSUE “Rosmorport” Makhachkala Branch.

Manolis Fulov was born on 22 January, 1963 in the village of Kazreti, in Bolnissky area, Georgian SSR.

From April 1998 till May 2013 he consecutively held positions of Executive Director for Port Reconstruction, Head of Construction and Repairs, Chief Engineer of FSUE Makhachkala Sea Trade Port.

In May 2013 he was appointed Deputy Director for Capital Construction and Repairs of the FSUE “Rosmorport” Makhachkala Branch.

Badge “In commemoration of the 200th anniversary of the Water and Land Communications Administration”.

Distinguished constructor of the Dagestan Republic.

Honors Certificate of the Ministry of Transport of the Russian Federation; 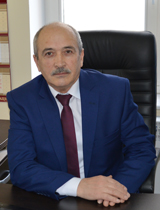 Gadzhimuradov Murad was born on October 28, 1956 in village of Tlyarosh of Charodinsky District of Dagestan ASSR.

In 1980 he graduated from Dagestan State University n. a. V. I. Lenin with specialization in physics and was qualified as “physics teacher and physicist”.

In 2006 he graduated from Russian Law Academy of the Ministry of Justice of the Russian Federation with specialization in jurisprudence with qualification of “lawyer”.

In 2009 he completed professional training in FSEI HPE “Russian Academy of Public Administration under the President of the Russian Federation” under program “governance and national security”.

He started his labor activity in 1975.

From January 2012 to February 2013 he worked as the assistant to the deputy of the State Duma of the Federal Assembly of the Russian Federation of the sixth convocation Abdulatipov R.G.

In January 2017 he was appointed the Deputy Director for personnel and interaction with executive authorities of the FSUE “Rosmorport” Makhachkala Branch.

Medal of the Order "Merit for the Fatherland, the 2nd degree”;

Medal "For loyalty to the Fatherland";

Thanks of the Supreme Commander of the Armed Forces of the Russian Federation.

Honored Worker of the law enforcement bodies of the Republic of Dagestan. 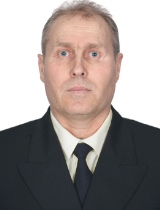 Deputy Director for Security of the FSUE “Rosmorport” Makhachkala Branch

Ivan Galchenko was born on February 22, 1962 in Lantsevo village of the Kuibyshev region of Ukrainian SSR.

In 1986 he graduated from Caspian Higher Naval College n.a. S.M. Kirov in speciality “navigation” and was awarded the qualification of Engineer Navigator.

He started his working career in 1980.

Information on his working career over the last 5 years:

From October, 1985 to October, 2015 he served in the Armed Forces of the Russian Federation.

In February, 2016 he was appointed Deputy Director for Safety of the FSUE “Rosmorport” Makhachkala Branch.

Medal “For distinction in the Protection of the State Border”;

Medal “For distinction in Military Service”; 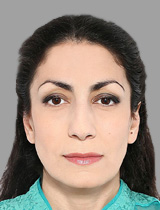 In 2001 she graduated from the Dagestani State Technical University with a degree in Information Systems in the Economy. She was conferred qualification of Economist.

She started labor employment in 2001.

Information on labor employment for the last five years

From July 2015 to April 2018 she worked as Leading Specialist, Senior Specialist for Accounting of the FSUE “Rosmorport” Makhachkala Branch.

From October 2017 to April 2018 she performed the duties of FSUE “Rosmorport” Makhachkala Branch Chief Accounting Officer without removal from her current position. 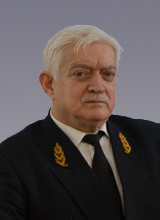 Urguyev Shakh Magomedovich was born in the village of Kuli, Kulinsky District, Dagestan ASSR on June 25, 1953.

In 1973 he graduated from the Baku nautical school of the USSR Navy Ministry with a specialization in marine navigation, as an engineer navigator.

In 1990 he graduated from the Odessa Institute of Marine Fleet’s Engineers with a specialization in navigation on sea routes, as a navigation engineer.

In 2014 he graduated from the Federal State Budgetary Educational Institution of Military Education “Admiral Makarov State University of Maritime and Inland Shipping” under a professional development program “Advanced Courses of Captains of Seaports”.

In 2017 he graduated from the Moscow State Academy of Water Transport – the branch of the Federal State Budgetary Educational Institution of Military Education “Admiral Makarov State University of Maritime and Inland Shipping” under a professional development program “Advanced Courses of Captains of Seaports”.

He started labor employment in 1969.

In February 2020 he was appointed to the position of Deputy Director for navigation safety of the FSUE “Rosmorport” Makhachkala Branch.